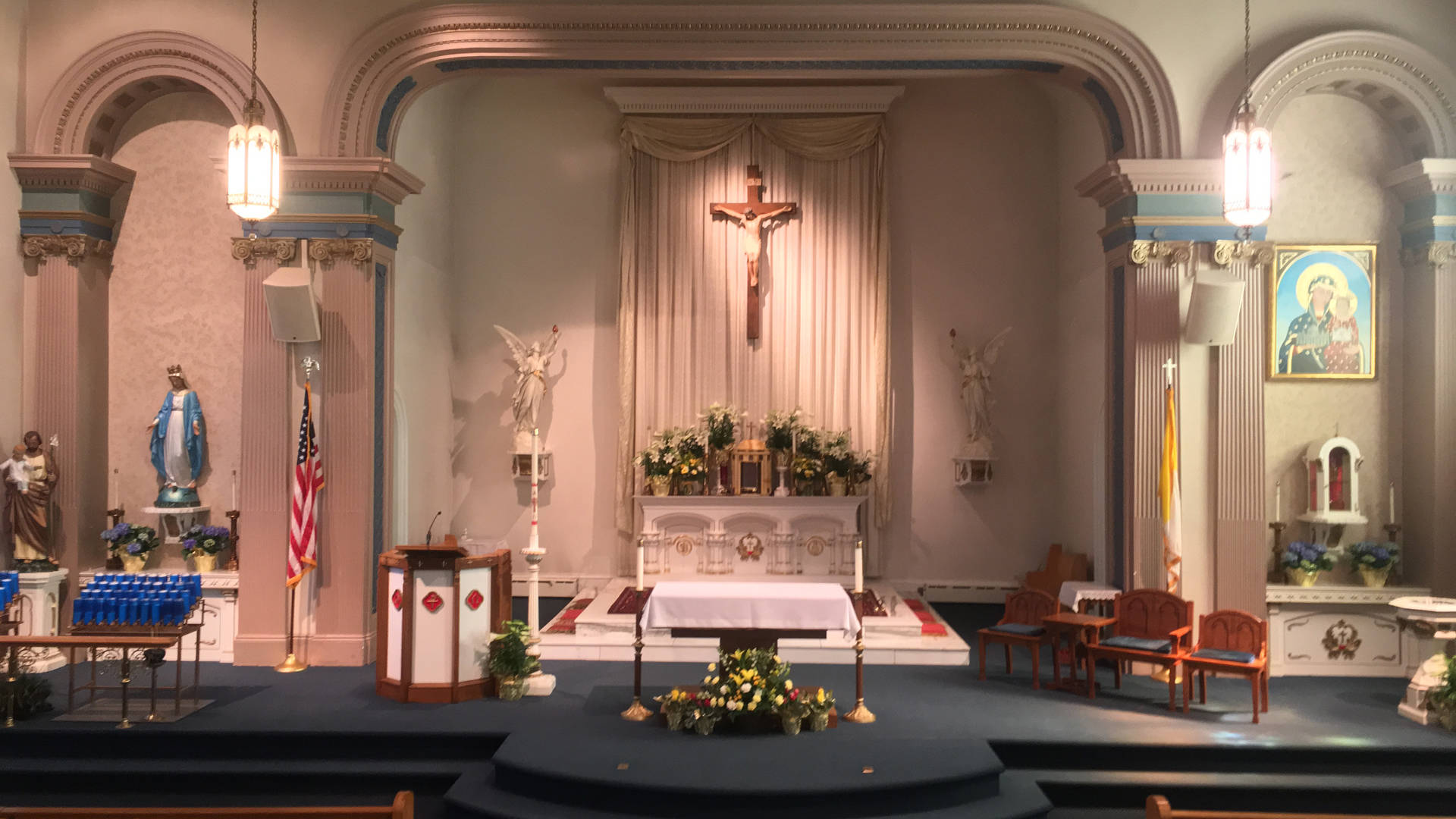 The Orthodox Metropolitan Vasilios of Constantia and Famagusta is one of the Orthodox leaders welcoming Pope Francis to Cyprus.

Pope Francis meets with Rabbi Arie Zeev Raskin and through him, extends a greeting to the Jewish community in Cyprus.

A "Patient Church”: in Cyprus Pope Francis sheds light on the synodal process

The Pope’s words in Cyprus on Thursday portray an identikit of Christian communities that allow people to grow through accompaniment, without complaining or harbouring nostalgia for past greatness.

In his meditations for Advent this year, the preacher of the Pontifical Household focuses on bringing to light “the inner splendour of the Church and of Christian life", without "closing one’s eyes to the reality of the facts", so that each person can face his or her responsibilities from the right perspective.

A sequence of political crises, financial speculation, the COVID-19 pandemic, and, finally, the massive explosion at Beirut's port on 4 August 2020 have plunged Lebanon into economic disaster. However, according to Maronite Archbishop of Beirut Paul Abdel Sater, not all is lost and there still is hope.

Pope Francis emphasizes the importance of interconnection and joint efforts in facing the challenges of the Mediterranean region, in his address to participants at the 2021 Rome MED - Mediterranean Dialogues.

Apostolic Nuncio to the European Union has died

Archbishop Aldo Giordano died after he was admitted to a hospital in Leuven, Belgium, for Covid-19.

Pope at Mass in Cyprus: Only together can we be healed from blinding darkness

Pope Francis refers to the parable of the two blind men from Matthew's Gospel to urge Cypriots to follow three steps in order to be freed of a similar darkness in which we often find ourselves.

Pope at Holy Synod: Differences are not irreconcilable

On the second day of his visit to Cyprus, Pope Francis meets with the Holy Synod of the Cypriot Orthodox Church. During his address, the Pope underlined the common bonds between the Catholic and Orthodox Churches and his desire to deepen ecumenical dialogue, taking as his model St Barnabas. Christians in Nigeria’s Zamfara State have been cautioned against public worship in churches lest they be attacked, abducted, and their places of worship torched.

The warning, for which a “Fulani association” claims responsibility, is contained in a letter circulated by the office of the state police commissioner.

“The command has already alerted its Divisions/Formations for immediate proactive action and deployment of men at churches especially during services,” the police leadership in Zamfara said in reaction to what it described as “an anonymous letter threatening to launch attack on churches, especially churches located at the outskirt of the metropolis.”

The threatening letter was delivered to police headquarters in Gusau, the state capital, Nov. 19.

In the document, members of the "Fulani association who are planning to launch war against Christian religion" claimed responsibility of the "anonymous letter".

“We want churches to be closed from now to the next three years. If they are not closed, we will start burning them,” those behind the letter threatened, and added in reference to Christians in Zamfara, “We will follow their pastors to their houses whether during raining or in the mid night and kidnap them and their family.”

They claimed responsibility of some previous attacks on Nigerians saying, “We have been harming people but we have forgotten the Christians. So, we will start from now until Christmas time. We are going to start with churches located out skirt of Gusau.”

“We are going to start kidnapping of Christians and burning of their churches located outskirt of Gusau town and we are going to do it when no one expect it to happen.”

The letter said, “We are taking this action because they (Christians) were the one that started causing this problem; they harmed our children at Saminaka area and chased away our cows while on rearing behind Karma Hotel.”

According SaharaReporters, security officials in Zamfara said they have taken precautionary measures following the threats.

Mohammed Shehu, spokesperson for the Zamfara State police command, DSP, said that Christian Association of Nigeria leadership in Zamfara had been invited to “discuss security measures around the churches.”

“In that regard, a special squad has been created by the CP to patrol and protect worshippers, especially on Sundays,” the security official said, adding, “plain-clothes personnel have been deployed for intelligence gathering and to unravel those behind the threat letter.”

Speaking to ACI Africa Dec. 1, the Director of Communications of the Diocese of Sokoto said measures are being taken to protect Christians.

“No formal statement has been made by Church officials in the State but internal strategies are at work,” Fr. Chris Omotosho said.

In a Dec. 1 message, CAN representatives in Zamfara said, “Threat against Christians and churches by the terrorists is a divisive strategy against the effort of Christian and Muslim leaders towards ending criminalities in the North-West.”

“We know that all kidnappings and other criminalities being perpetrated in the North-Western part of the country are the handiwork of terrorists who either migrated from the North-East or those who were released under the purported rehabilitation program of the Federal government,” the Christian leaders said in their message, “No Christian Should Be Killed in Zamfara.”

They added, “Now that a Federal High Court has labelled those criminals terrorists, we call on the Police, the military authorities and other security agencies to rise up to the challenge of the terrorists who have turned kidnappings into the biggest business venture in the geopolitical zone.”

“The way and manner by which our security agencies have been handling those criminals are totally unacceptable, reprehensible and unprecedented. Criminals are criminals irrespective of their religious, political and ethnic affiliations,” CAN wrote.

“The leadership of the national Christian Association of Nigeria (CAN) in our recent visit to Sokoto and Kebbi states was alarmed, surprised and shocked by the record of those criminals who are killing and kidnapping with impunity in the area as if there was a pact between them and the security agencies,” the Christian representatives recalled.

CAN stated that with Christian and Muslim leaders in Nigeria working together to stop sectarian criminality in the northwest, the criminals “are now trying to introduce divisive ways by declaring war against Christians and churches in the zone especially in Zamfara State where they are gradually turning into their strongholds.”

“We have no problem with Islam or with our Muslim brothers and sisters but with the handful fanatics and their financiers who have declared war against Christianity,” they said.

CAN representatives in Zamfara appealed to all peace-loving Muslims “to speak against those who are painting Islam what is not. We know that there is no right-thinking Muslim leader who will be happy with the killings of Christians.”

“We call on President Muhammadu Buhari to sanction any Commissioner of Police or Zonal Police Commanders and the Director of State Security Services wherever kidnappers operate in the country henceforth. This will go a long way in reducing the menace as we are approaching the Yuletide season,” they said.

The Christian leaders urge the federal government “to refund all the ransom paid for the release of those who were abducted in the last five years.”

“President Buhari should also direct the Police to arraign all suspected kidnappers, bandits and terrorists in their custody with a view to stopping those who are perpetrating the atrocities. Failure to do this will force the Christian Association of Nigeria (CAN) to ask our members to embrace the principle of self-defense wherever the security agencies appeared compromised,” they added.

Nigeria has been grappling with insecurity since 2009 when the Boko Haram insurgency began targeted attacks with the aim of turning Africa's most populous nation into an Islamic State.

Members of the Islamist group have organized attacks on various targets including civilians and political and religious leaders.